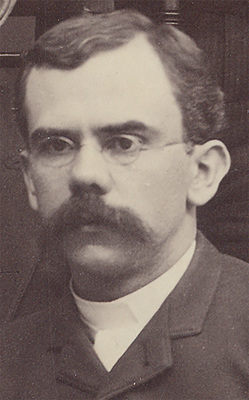 Union College Class of 1876; Professor of Rhetoric and of English Language and Literature, 1885-1903

James Reagles Truax was born in and educated in Schenectady.  He started his academic career very early, teaching at a district school at the age of thirteen, an unusually young age even for that time. In 1876, he graduated from Union College, where he was a member of Psi Upsilon and Phi Beta Kappa. He went on to obtain a Bachelor of Divinity degree from Drew Seminary. He spent the next few years working first as an engineer, then a pastor, then in various other clerical positions until being appointed as a Professor of Rhetoric, the English Language and Literature at Union College in 1885.

Truax, who had also expanded his education through summer travels in Europe, was a thorough and exacting teacher, remembered by former students as clear of thought and expression. He believed that English, as the “mother tongue,” should be studied thoroughly. But he was also active in many other enterprises on and off campus. He taught a voluntary weekly bible study class, founded a Shakespeare Society to read the Bard’s plays, helped found the Sigma Xi society, was elected President of the Senate (a debating society), served as the secretary of the faculty for ten years, and wrote a then-much-admired sentimental poem on the College’s “Old Blue Gate.” He also wrote a pamphlet called Arendt Van Curler, Founder of Schenectady as well as various articles, edited Andrew Carnegie’s Success and How to Attain It, helped found the city’s public library, and briefly chaired the Schenectady Municipal Civil Service Committee. In 1894, Union awarded him him an honorary PhD degree.  Just a year later, however, after the arrival of Professor Edward Everett Hale on campus, Professor Truax’s duties at the College were reduced to Professor of English Language and Literature.

Mrs. Perkins does not appear to have liked Professor Truax very much, seeing him as a rival to her son-in-law Professor Hale. Her fears of competition between the two were not unfounded. In 1902 the Board of Trustees tried to force President Raymond to choose between the two professors, as the financially-strapped College could not afford to keep both. The professors came up with a consolidated plan of study to present to the board in February of 1902, and both were allowed to stay, but Truax left at the end of the following school year, citing health reasons. Some mystery remains surrounding his departure. Even Mrs. Perkins was indignant over the circumstances of his final separation from the College:

He was here over eighteen years, and no man seems to think of him for a moment (September 23, 1903)

Despite the College’s apparent lack of gratitude for Professor Truax’s long service, Mrs. Perkins did confirm that he was able to engage and interest his students.

After leaving Union, Professor Truax traveled around Europe and then came back to Schenectady.  He became one of the founders of the Schenectady County Historical Society and served in local government until his health failed in 1910.  He remained an invalid until his death in 1915.

Two years after graduating from Drew Seminary, Truax married Harriet M. Watson, who had studied music at Syracuse University. The couple had two children, Lillian Blanche, born in 1879, and James Lowell, born in 1884. James Lowell died shortly before his tenth birthday, but his sister grew old enough to marry in a ceremony attended by Mrs. Perkins. The Truax family lived in the north faculty house of North College, where Mrs. Truax would host Book Club teas. In her letters, Mrs. Perkins seems rather more sympathetic toward Mrs. Truax than toward her husband and expressed regret that she was forced to leave the College. Mrs. Truax would nevertheless go on to play a respected role in the local community; when her husband became too ill to work, she took a position at General Electric as a counselor for the female employees, a job she would hold until retiring in 1930 at the age of 75. Two decades later, just a few months before her death, the Schenectady Gazette wrote an article celebrating Mrs. Truax as GE’s oldest pensioner and noted that she was still remarkably spry and keen at almost 98 years of age.