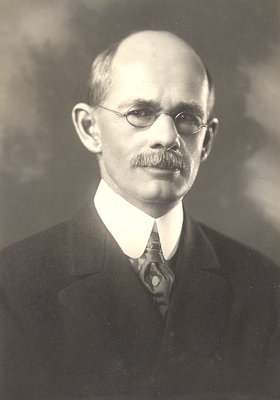 Edward Everett Hale – or “Jack” as he was known to Mrs. Perkins and his immediate family – was born in Boston to Edward Everett Hale Sr. and Emily Beecher Perkins Hale. His family was distinguished in literary circles as well as a number of other fields.  His father was a leading Unitarian clergyman and the well-known author such works as The Man Without a Country, and his grandfather was the first editor of the Boston Daily Advertiser. Hale was also distantly related to Secretary of State Edward Everett, American spy and hero Nathan Hale, novelist Harriet Beecher Stowe, and feminist author Charlotte Perkins Gilman.

Hale received his AB from Harvard in 1883, remaining there an additional three years to do graduate work. From 1886 to 1890 he taught English at Cornell. He then traveled to Germany under a Harris Fellowship from Harvard, receiving his PhD from Halle in 1892. Returning to the United States, he spent three years as chair of English at the University of Iowa before accepting the position of Professor of Rhetoric and Logic at Union College in 1895.  A strong incentive to return to the east was his marriage two years earlier to Rose Perkins (see below), the daughter of Union College Professor of Chemistry Maurice Perkins. Hale was already familiar with Union, having first visited it a decade earlier.  Moreover, his uncle had worked at the College as Acting Professor of Mental and Moral Philosophy from 1869 to 1871 and his father had given several lectures there. Hale would reside on campus with his family for the rest of his life, first in a house on Nott Street dubbed The Orchard, and later, after the death of Maurice Perkins, in what had been the Perkins home in South Colonnade.

When Hale arrived on campus in 1895, the College’s departments of Rhetoric and Logic and of English were made into two distinct administrative entities. However, during the financial crisis faced by the College at the turn of the 20th century, the College Board of Trustees sought to dismiss either Hale or the head of the English department, James Truax, in order to save money. Before a choice finally had to be made, Truax resigned from his position, and in 1903, Hale became the head of the new English department, combining both disciplines and teaching all the courses himself for the first few years. He received a LittD from Union in 1928, and remained with the English department until shortly before his death in 1932.

A prolific writer, Hale began publishing while in graduate school. While at Union, he supplemented his income by writing many textbooks, including selections from literary classics by authors such as Milton, Longfellow, Shakespeare, and Tennyson. He also wrote biographies of James Russell Lowell, William H Seward, and his father, and contributed many articles in both German and English to contemporary periodicals. But Hale was also a man of varied interests and went through several phases of passionate involvement with various organizations, including the City Mission and a literary society that started with a series of poetry readings and eventually became the English-Hale Club. He was briefly involved in politics; more lastingly, and true to his belief that a man well educated in the arts must spend ten years each on literature, music and painting, he frequently attended Sunday organ recitals in the Memorial Chapel and took up painting, even receiving some recognition for his Far Western landscapes and Indian subjects. He loved the outdoors and was a charter member of the Adirondack Mountain Club. He was a also a member of the Modern Language Association, the American Association of University Professors, the American Association of Arts and Sciences and the prestigious Century Club in New York City.

“Spike,” as Hale was called in campus due to his tall and thin stature, was respected but not always popular among his students. Remarks collected after his death reflect a variety of qualities that he brought to his teaching and intellectual life at Union. Charles Waldron, Union College Class of 1906, wrote that:

He had no gift for attracting superficial youth, and while most kindly by nature, he believed it a waste of time to struggle with boys who did not wish to learn or who lacked the sensibilities to understand the material with which the course dealt.

English Department colleagues reported that it apparently required some effort to comprehend Hale’s lectures, but that in more informal settings, he surprised people with his ready wit, ease of manner, dry humor, and faith that:

He could teach English as well from an old copy of the Schenectady Gazette as he could from Mill’s Civil Liberty. College President Frank Parker Day described Hale in his eulogy as always thirsty for knowledge, A senior student among his junior undergraduates (October 24, 1932).

Following a heart attack in the spring of 1932, Professor Hale resigned from his post of department head, intending to continue teaching. However, on the evening of August 19th that year, while taking a stroll outside South College he collapsed from a second heart attack. He was buried in the college plot of Vale Cemetery. A portrait of him, painted by his sister Ellen Day Hale now hangs in the house where he lived, which was named in his honor after its remodeling in 1935/36. 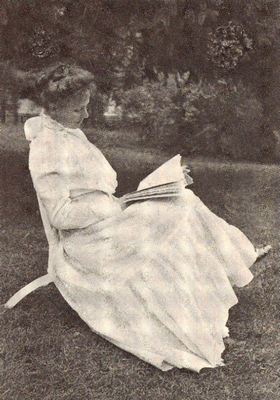 Rose Perkins was born on the Union College campus to Professor and Mrs. Maurice Perkins in 1866. She was educated at Miss Master’s School in Dobb’s Ferry, New York, Schenectady High School, and a private school in Paris. On June 15, 1893 she married Edward Everett Hale Jr., and the couple had three children, each of whom graduated from Union College: Maurice Hale, Class of 1918, Nathan Hale, Class of 1922, and Thomas Shaw Hale, Class of 1923.

Rose took an active role in the women’s suffrage movement, serving as president of the Votes for Women Association of Schenectady, as well as in local politics. In 1916, she became president of the Schenectady Board of Education and in 1920, was elected to the Schenectady County Board of Supervisors, apparently becoming the first woman elected to public office in New York State.  She was also a member of the Robert Beverly Hale Library and the Kingstown Congregational Church. She shared her mother’s love of gardening, eventually becoming a member of the South Country Garden Club; it was Rose who arranged for the plaque to be erected on Union’s campus that still recalls the location and beauty of “Mrs. Perkins’ Garden.”

In 1904, the Hales bought a house at Matunuck in Wakefield, Rhode Island, where Rose spent summers and where she would eventually retire. Indeed, soon after her husband’s death in 1932, Rose left the College which had been her home almost her entire life. A reception was given in her honor on the occasion by the Faculty Women’s Club of Union College. One hundred and fifty people were present, and she was presented with a silver bowl filled with spring flowers. Before settling permanently in Matunuck, however, she spent a few months in Arizona. Family records suggest that she wrote several children’s books and operated a boys’ camp at Matunuck. After a long illness she died in North Kingstown, Rhode Island, at the age of ninety-seven.