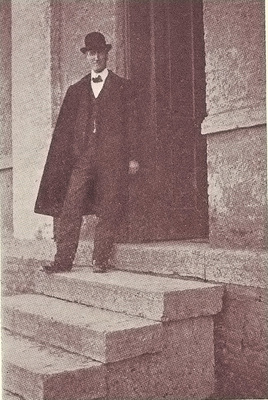 Charles B. Pond, a practiced bill collector with experience in the construction industry, served as an assistant to Union College Treasurer Frank Bailey during the critical years at the beginning of the twentieth century, when Bailey was first trying to resolve the College’s dire financial difficulties. Bailey himself was based in New York City, but the colorful Pond was literally his man on the spot, starting out in a house on the north side of the Union campus at 642 Nott Street and later building a new home at 17 South Lane, where Pond lived until his resignation and appointment as Commissioner of Public Works for the City of Schenectady in 1908.

Pond was a large, loud, cigar-smoking man with no academic pretensions or aspirations. Later described by Charles Waldron as Bailey’s “blunt and rigorous instrument,” he was undoubtedly effective, but earned a bad reputation on campus, bullying and offending the genteel sensibilities of the faculty. Although charged with the unpleasant task of collecting bills and fines, he appears to have derived considerable pleasure from it, performing his duties with belligerence and aggression and sometimes demanding more than was actually owed. After Pond had himself sworn in as a special deputy sheriff, he even kept an intimidating revolver on his desk.

In addition to collecting debts, Pond occupied himself with other campus affairs such as planting trees and managing workmen, although his efforts – such as his idea to lock the College gates on Sundays or to make tradesmen pay a tax for delivering their goods – were often met with hostility. “It is no wonder,” wrote Mrs. Perkins on August 5, 1904, “a collector of bad bills, need not be suppose[d] to know how to administer an estate.” But it was Pond’s manner as much as his actions or ideas that caused offence.  Mrs. Perkins described him generally as:

and often wrote of his rudeness, bad taste and insulting language. In fact, Pond’s manners were so bad that a paragraph appeared in the Schenectady Evening Star during his tenure called “Disgraceful Behaviour” that recounted the vile language of “a prominent Union official” before mixed company at the post office. Complaints flowed to Frank Bailey, the only person to whom Pond felt accountable, although Mrs. Perkins occasionally allowed that Pond’s unpleasantness might have been unintentional and noted that the College deficit was in fact shrinking during the time when he was active on campus.

Pond’s relationship with the students, to whom he was known as “Ducky” or even “Pond’s Extract” (the name of a patent medicine) was similarly mixed.  His vulgar speaking style and unorthodox methods of straightening out the College’s finances were often amusing to the undergraduates. Pond himself enjoyed the company of students and was flattered when invited to spend time with them. On the other hand, he was uncompromising when it came to the prompt payment of College bills. In one case, he sent three men to nail up a student’s door until a debt was paid, declaring that it didn’t matter whether the student was inside or out.  In another incident reported by Mrs. Perkins, a group of freshmen and sophomores damaged some College property and

Mr. Pond behaved absurdly as usual, a mixture of justice and foolishness (November 22, 1903).

It took College President Raymond to remind Pond that he had no disciplinary power.

Despite his controversial personality, it cannot be denied that Pond was effective in leaving the College in much better financial shape than under the more lenient officials of the past. His firmness with the merchants, the students, and even the faculty helped Bailey pull Union out of its then-desperate financial situation.