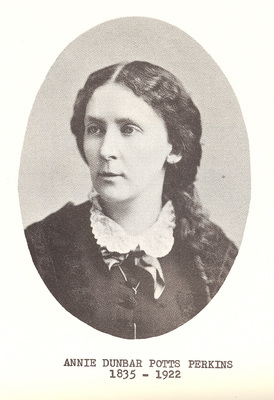 Anne Dunbar Potts was born in Natchez, Mississippi, the daughter of a pastor. She spent much of her youth in New York City before the outbreak of the Civil War, during which time she did hospital work.  In 1864, she married Maurice Perkins, who a year later would join the Union College faculty as Professor of Chemistry. When they arrived on campus, they moved into the faculty residence at the western end of South Colonnade and there reared their three children, Rose, Alice, and Roger.  After Maurice Perkins’ death in 1901, Rose and her husband, Union College professor Edward Everett Hale Jr., moved in with Mrs. Perkins and reared their own three children there.  Thus Mrs. Perkins spent her entire life at Union – from 1865 until her death in 1922, a period of nearly 60 years – living at the center of the campus.  Although the South Colonnade residence would eventually be named for her son-in-law, it was Mrs. Perkins who was its longest resident. (Note: Brief biographies of all three Perkins children, as well as Maurice Perkins and Edward Everett Hale Jr., can also be found on this website.) 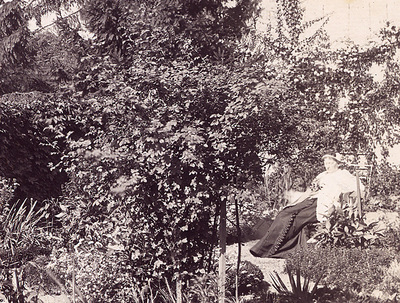 Mrs. Perkins is best remembered at Union today for establishing a campus garden behind her home that still exists in much modified form on the southern side of Old Chapel.  Begun in 1866 as a vegetable patch, it quickly became an extensive flower garden and labor of love for Mrs. Perkins, who tended it personally until 1920. More centrally located though less extensive than Jackson’s Garden on the northern side of campus, Mrs. Perkins’ Garden rivaled its nearby cousin in appeal and featured a wide array of flowers, shrubs, and trees.  During the winter, Mrs. Perkins’ gardening efforts shifted indoors, where her “plant room” was also fondly remembered by generations of students.

Mrs. Perkins’ central position on campus extended well beyond the reach of her garden, however.  Fluent in French, she acquainted herself with a wide array of subjects, from fine art to the natural sciences, and was actively engaged in the life of the College.  She not only supported her husband and son-in-law but herself gave occasional lectures on literature, translated manuals and other documents for the College, participated in charitable activities, held classes on religion for the undergraduates, opened her home in order to read books aloud to students and interested faculty wives, chaperoned College and fraternity dances, and attended numerous public and private events.  Opinionated and not one to be intimidated, she earned the nickname “Duchess” from the students and towards the end of her life was freely compared to Queen Victoria in both person and manner.  But her imperial style also made her a figure of respect.  Charles Waldron, Union College Class of 1906, recalled in the Union Alumni Monthly that seniors would even ask her to co-sign their diplomas before they left campus. 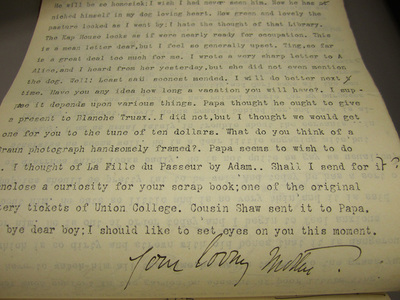 As such a longtime resident of the College, Mrs. Perkins provided continuity with the past and connections to a wide community. Returning alumni were frequent visitors, knowing that they could still find her at Union long after others whom they had known had left campus. She personally knew or had known the most influential figures in the College’s first century – from Eliphalet Nott to Andrew Van Vranken Raymond – but she also knew their homes, their families, their servants, and even their pets.  Her dedication to her own family and keeping them connected to Union and each other prompted the writing of long, entertaining letters to her children once they had left home, a task that she tackled with particular energy after she taught herself to type in 1895, on a machine that she nicknamed “The Demon.” In her letters, she chronicled with wit and candor her observations on the life around her, in the process not only illuminating the personalities and concerns of Union’s notables, but also revealing the important role played at the College by those whose contributions are often less visible to history.

Mrs. Perkins read and travelled widely and often commented on national and international events, but the focus of her attention remained her family, her garden, the Presbyterian Church, and her busy social and intellectual life at the College. Only in her last few years did she retire from her customary activities.  She died in the summer of 1922, after an attack of neuralgia and was buried in the College plot in Vale cemetery. A few months later, Edward Everett Hale Jr. wrote a tribute published in the Union Alumni Monthly in which he noted that:

Mrs. Perkins was a woman of very striking character. She had very great powers of appreciation of the beautiful in life, both of such things as could be seen and felt and the more spiritual things .… She cared deeply for all sorts of artistic things, especially painting and poetry; she had read much and traveled a great deal so that, as she had a remarkable memory, she had a broad acquaintance with the art[s], one might almost say of the world.  These powers and opportunities joined to her remarkable powers of imagination made her a most striking and agreeable companion, for she was interested in a very wide range of subjects and could talk well on many things. … All in all a very remarkable woman, and one who will be long remembered by many.