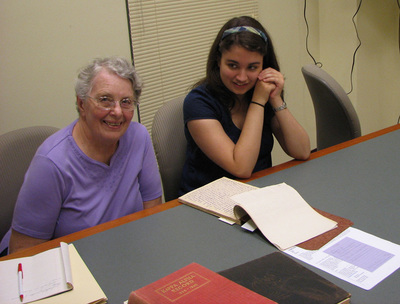 In 2009, Perkins descendent Margaret Bushnell generously gifted Union College and Schaffer Library’s Special Collections with a collection of over 700 letters written by Anne Dunbar Potts Perkins, wife of Maurice Perkins, Union College Professor of Chemistry from 1865 to 1901.  The letters were composed between 1895 and 1904 while Mrs. Perkins  and her family were residing at the center of the College campus in what is now known as Hale House.  All but a few of the letters are addressed to the Perkins’ son Roger, who was then at Johns Hopkins University studying medicine and, later, beginning his professional career in Ohio.  Some of the letters are handwritten, but most were typed by Mrs. Perkins herself on a machine that she nicknamed “The Demon.” At some later time, Roger bound his mother’s letters into ten soft-covered volumes, roughly corresponding to the years in which they were written.

Mrs. Perkins has long been remembered at Union College for the the beautiful garden that she cultivated for over 50 years behind Hale House and Old Chapel, the remaining section of which still bears her name. Suspecting that her letters would refer to this garden and, possibly, to other aspects of life on campus, Union knew that it had been given a treasure.  However, both the letters and the volumes themselves are in somewhat fragile condition.  Money was often short in the Perkins household, and Mrs. Perkins used every inch and frequently both sides of thin carbon paper when writing to her son.  Some pages have become torn or the ink has “bled” through from the other side of the paper.  Additionally, the binding process concealed the text along the edges of some of the letters, and miscellaneous notes and other material were glued into some of the volumes in a manner that makes them impossible to read in their current state.  Professional conservation work will need to be done, once funding is secured, before the letters can be digitized or made fully available to researchers. 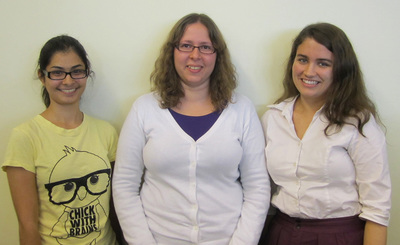 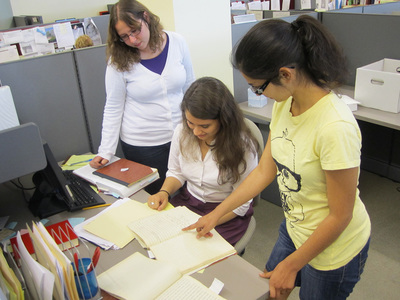 However, eager to get started, Schaffer Library’s Special Collections and Technical Services staff teamed up immediately upon receipt of the letters and charged student assistants Helen Willis and Olga Borodulina with creating a brief summary of every legible letter in order to assess the overall content of each volume.  They quickly discovered that the correspondence reveals Mrs. Perkins to have been a vivid writer and personality, who actively pursued a wide variety of interests while recording her lively observations of national, as well as local and family, affairs.  It was also clear to all that Mrs. Perkins’ letters constitute an incomparably rich source of information about nearly every aspect of College and student life during the period and offer a unique female perspective on what was then an all-male institution.  The students’ work led them to suggest that, until the necessary preservation work on the letters themselves can be done, some of the illuminating material that they contain about life at Union in the late 19th and early 20th centuries might be shared with the public via an online guide to the campus from Mrs. Perkins’ point of view.  This website and its associated tours are the result of that suggestion.

The heart of the Mrs. Perkins’ Union College website is an interactive map highlighting the many areas on campus – from the new fraternity houses being built along Library Lane to its westernmost “Pasture” – that feature in her letters.  Period images from the College archives and brief stories and/or excerpts from Mrs. Perkins’ letters are linked to each location. Additional links on the project website provide contextual information about Union College at the time Mrs. Perkins was writing, a list of the plants she tended in her garden and home, and short biographies of many of the individuals she mentions including Andrew Van Vranken Raymond, Moses Viney, Julia Benedict (who looked after Jackson’s Garden at the time), and a variety of professors and their families. The site also includes information for a self-guided walking tour that has been prepared in conjunction with the release of the Perkins website and as part of the celebration of Schaffer Library’s 50th Anniversary in the fall of 2011. 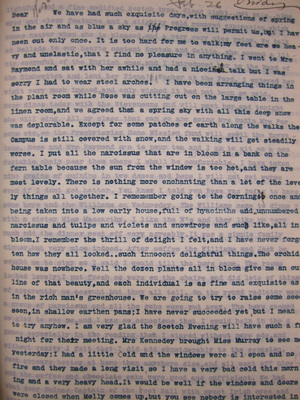 Typical letter typed on thin paper with “The Demon” 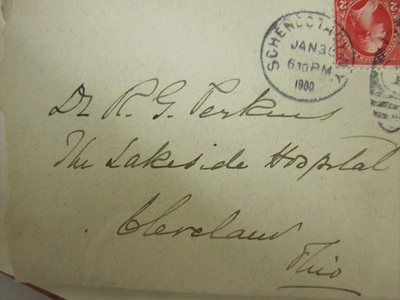 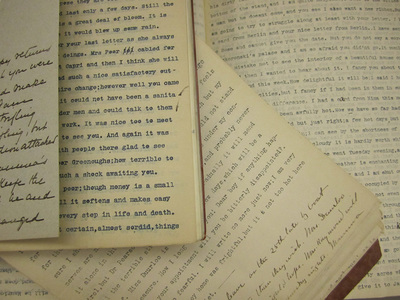 Helen Willis and Olga Borodulina prepared the basic material for the website under the direction and with the support of Schaffer Library’s Digital Projects Team members Jennifer Carr, Gail Golderman, Ellen Fladger, and Annette LeClair.  This project would not have been possible without the extraordinary dedication and enthusiasm that Ms. Willis and Ms. Borodulina brought to their work between 2009 and 2011. With constant reference to Wayne Somers’ Encyclopedia of Union College History (Schenectady: Union College Press, 2003) as well as materials in the College archives, they conducted additional research, designed a campus map and tour route appropriate to Mrs. Perkins’ time, assembled quotes from her letters, scanned period images, and drafted the text for the selected biographies and sites on the campus map.  Throughout 2010 and 2011, Schaffer Library Digital Services student assistant Teresa Crasto brought similar talent and enthusiasm to the project.  Ms. Crasto teamed with Jennifer Carr to create the digital version of the map, adapted the prepared text and images for presentation online, proofread the final copy, and uploaded most of the material for the site.  Special Collections student assistant Amelia Zimet worked with Annette LeClair to refine the tour routes, and Gail Golderman created the version of the tour that can be accessed via a mobile device. Grateful acknowledgement is made to the donor of the letters Margaret Bushnell and to Wayne Somers, Ellen Fladger and all of the other individuals above who made the production of this site possible.