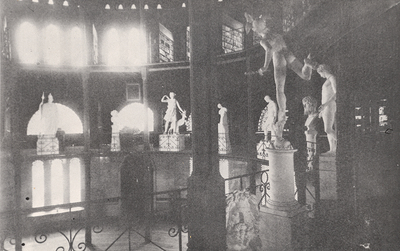 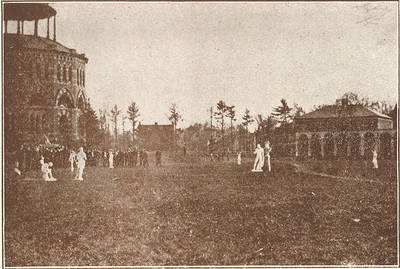 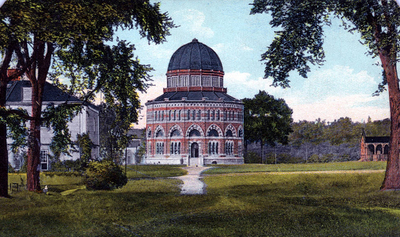 The building that appeared as a round and windowless “chapel” on the campus plan of Joseph Jacques Ramée was finally constructed, after the design of Edward Tuckerman Potter (Union College Class of 1853), as a sixteen-sided Alumni Hall that ultimately became a memorial to Eliphalet Nott and an iconic Union College landmark. Due to the College’s financial difficulties in the mid-nineteenth century, when the building was constructed, it took over 20 years to complete. Impractical for most uses when it opened in 1877 and very difficult to heat, social events were still sometimes held there. “The idiotic sophomores insisted upon having their soiree in the Middle Building! It is freezing ten inches from the big stov[e],” wrote Mrs. Perkins in 1897.

Student mischief was common in the “Round Building,” which also housed a modest museum for many years. Freshmen and sophomores fought to keep their class flags on top of the dome in November of 1903. Earlier that same year, Mrs. Perkins reported that some freshmen took the plaster casts of classical statues and the marble busts from the museum and put them on the Athletic Field’s baseball diamond, “the Discus thrower appropriately placed on the pitchers place, the Venus with uplifted arms on first base and so on, until for fielders etc. they were reduced to the small busts” (March 16, 1903). Believing that the building would soon crumble if not repaired, Mrs. Perkins was glad to see it turned into the campus library in the early 1900s thanks to a $40,000 gift from Andrew Carnegie, which helped fund the necessary renovations.

The library remained in the building until 1961, after which the building had varied uses, including serving as the College theatre and bookstore. Following extensive renovations and a rededication ceremony in 1995, it now houses a large multi-use hall, art galleries, and student study space.

One of these images is from the Union College Postcard collection. You can view both front and back of this postcards and more information in our digital collections database on New York Heritage below.
Library/Nott Building, early 1900s. (bottom)