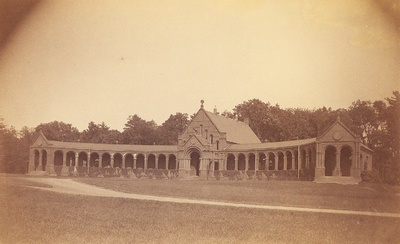 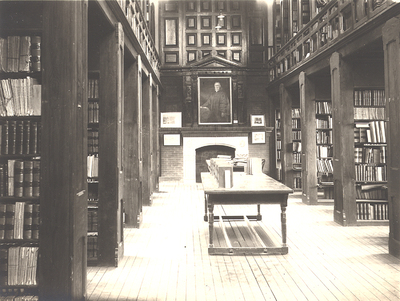 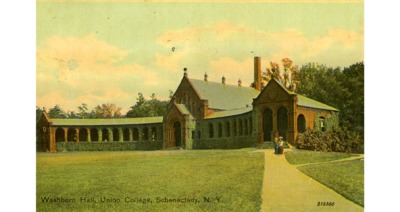 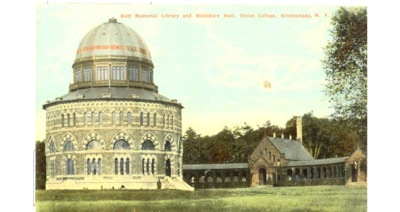 Washburn Hall (or the Powers-Washburn Building) was built in 1883 during the administration of the College’s seventh president, Eliphalet Nott Potter (Union College Class of 1861). Although inspired by Joseph Jacques Ramée’s plans for the campus, its Victorian-style design by William Appleton Potter (Union College Class of 1864) featured red brick and molded ornaments that made it quite distinct from the stuccoed buildings that had been erected previously on the College grounds. Originally named for donations made in honor of Thomas Henry Powers as well as Edward Abiel Washburn (both of whom had a distant connection to the College), it was the first building at Union to carry its donors’ names. Providing at various points a home for the library, classrooms, numerous academic departments and administrative offices, student publications, the radio studio, theatre, bookstore, snack bar, a naval issues store, and the headquarters of the maintenance department, it boasted a bewildering variety of uses over its lifetime.

The central section of the building, originally called Washburn Memorial Hall, contained the College library from 1884, until its relocation to the Nott Memorial in 1903. The library was a long and handsome room with large balconies on two sides and served as a social space as well, twice hosting the Senior Ball. However, the library was quite cold until 1894, when President Raymond installed heat and electric lights. After the library left, the Civil Engineering Department took over the space.

Although Mrs. Perkins must have had a good view of Washburn Hall from her windows and made use of the library, she rarely mentioned the building. Once she drew attention to the fact that while the building had relatively comfortable rooms, people were often cold inside due to its many doors to the outside. She wrote, “It has been so cold all this week in the Red Building that the boys have had very few recitations, but to their sorrow the laboratory has been very comfortable” (March 4, 1896).

Eventually the College concluded that Washburn Hall not only clashed too much with the other buildings on campus, but also was too expensive to maintain. Its decision to build Schaffer Library right behind the building sealed Washburn Hall’s fate, and it was razed in 1963. Roger Hull Plaza now covers the place where it stood.

Some of these images are from the Union College Postcard collection. You can view both front and back of these postcards and more information in our digital collections database on New York Heritage below.
Washburn Hall, circa 1910. (top)
Washburn Hall with Library/Nott Memorial 1910. (bottom)