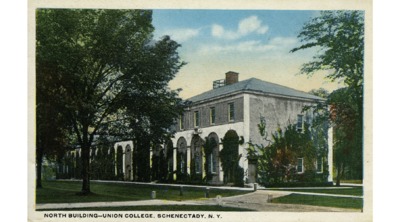 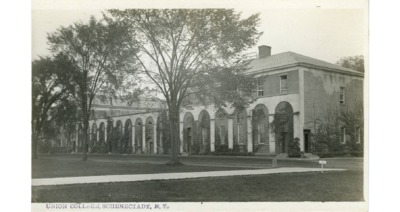 Philosophical Hall was constructed on the end of North Colonnade in 1852, in accordance with Joseph Jacques Ramée's plans for the campus. Constituting what is now part of the Arts Building, Philosophical Hall provided space for the departments of Natural Philosophy (Physics and Chemistry). The top floor was occupied by the Physics Department, which included a large lecture-demonstration room, while the first floor contained the Chemistry Department and an analytical chemistry laboratory.

As a Chemistry professor, Maurice Perkins spent a lot of time in Philosophical Hall, and after her husband's death in 1901, Mrs. Perkins noted that the sight of the laboratory door became very painful for her. She also mentioned it being very cold there one winter. The equipment in the laboratory did sometimes provide a useful measure of temperature control; in 1898, after some of her daughter Rose's chickens died, Mrs. Perkins wrote that "Papa and Louis are now going to try some eggs in the Incubator in the Laboratory."