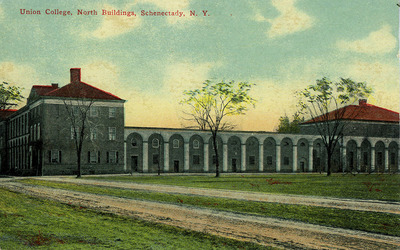 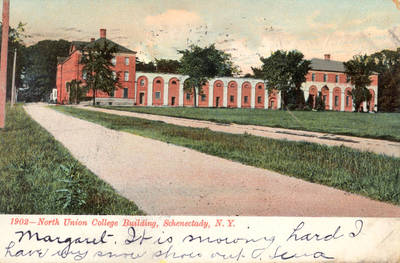 The North and South Colonnades were built in 1815, following Joseph Jacques Ramée’s plans for the campus. Until the construction of Philosophical and Geological Halls in the 1850s, they contained most of the College’s recitation rooms and laboratories. Around the middle of the nineteenth century, North Colonnade held recitation, drafting, engineering model, instrument, and coal rooms, as well as a kitchen for the south faculty house of North College. At the time Mrs. Perkins was writing her letters, the Civil Engineering department occupied almost the entire first floor, and an electrical engineering laboratory was added shortly thereafter.

North Colonnade also had some unusual uses, sometimes serving as a storehouse for packed-up library and geological collections. In 1882, Professor Maurice Perkins added his own stamp by briefly setting up rooms for sick students on the second floor. For decades, the chapel bell also rang from the roof of this building.

After the period of the Perkins letters, a variety of academic departments occupied the building, which also sometimes included dormitory and student activity rooms. A major renovation project completed in 2007 transformed North Colonnade into the Taylor Music Building.