The Photographic Albums of the William James Stillman Collection 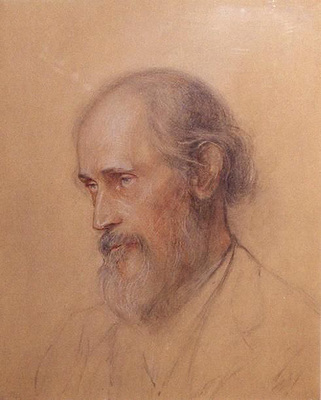 William James Stillman was born in Schenectady, New York, in 1828. He studied as a protegé of Eliphalet Nott at Union College, graduating in 1848. He moved back and forth between New York, Boston, and Europe throughout the 1850s, and then served as United States Consul, first in Rome (1861-1864), and subsequently in Crete (1865-1869). From Crete he moved to Athens, where the suicide of his first wife, Laura Mack Stillman, left him with two children. By the early 1870s he had remarried, to the painter Marie Spartali, whose family provided them with a home base in the UK. They would eventually have three children, two of whom survived infancy. Stillman spent the 1870s traveling extensively in the Balkans, Greece, and Italy, and finally settled in Rome in 1886. He retired to England in 1898, and died there on July 6, 1901.

Stillman’s careers were as rich and varied as his travels. In 1855, he founded the first American art journal, The Crayon, in New York with John Durand, and served as its first editor. He was an accomplished woodsman, and in 1858 led a camping trip to the Adirondacks for the Boston-based “Saturday Club,” which included such luminaries as Ralph Waldo Emerson, James Russell Lowell, and Louis Agassiz. He aspired to be a painter, and worked with prominent artists Frederick Edwin Church and John Ruskin. In 1856, he learned to practice photography, and produced some of the earliest photographs of the Adirondack wilderness as well as a pioneering early portfolio of the architecture of the Acropolis in Athens in 1870. Stillman was also closely connected to the nascent field of archaeology, exploring ancient sites across the Mediterranean, corresponding with archaeologists, and writing about excavations and discoveries.

His most longstanding activity was in journalism. From the 1860s onward, he wrote for a variety of publications, including The Nation, Cornhill, and the Atlantic. His experiences as Consul and as a journalist merged in his first book of 1874, The Cretan Insurrection of 1866-7-8, which marked the debut of his idiosyncratic style of writing personal experience into his political and historical analysis. Stillman’s life and work stabilized significantly in 1886 when he was appointed correspondent for Italy and Greece at the Times of London, based in Rome. He would eventually publish books on the uprising in Herzegovina, the Italian prime minister Francesco Crispi, and the Unification of Italy. His Autobiography of a Journalist, published shortly before his death in 1901, is in some ways a misleading title for someone who had as varied and accomplished a set of careers as Stillman.

The Collections at Union College

Between the 1950s and ‘70s, Stillman’s family donated his photographs and papers to Special Collections, Schaffer Library at Union College. The gifts included more than 400 prints of Stillman’s own photographs, most of which, significantly, remain in the original albums that Stillman assembled. These albums include photographs taken between the 1856 and the 1890s, and they reveal the breadth and depth of his complex photographic practice. They contain photographs ranging from views of well-known sites to unknown, picturesque corners across American and Europe. They include copies of prints that circulated widely among archaeologists and enthusiasts, and some prints of which we may have the sole copy. In terms of photographic techniques, scholars have assumed for decades that the works in these albums are albumen prints, but the visual evidence from Union’s (and other collections) makes it clear that extensive conservation analysis is necessary to determine exactly which photographic printing processes Stillman used.

These digital reconstitutions are an initial presentation of some of the photographic albums to the public and to researchers. Information about each print is limited to descriptive titles, current research on dates, and some commentary on selected photographs. The albums are but one part of a collection that also includes additional commercial photographs, letters, manuscripts, and other archival material related to the Stillman-Spartali family. The digital integration of the whole Stillman collection is currently the subject of a project being undertaken by David Ogawa, Associate Professor of Art History, Department of Visual Arts, Union College 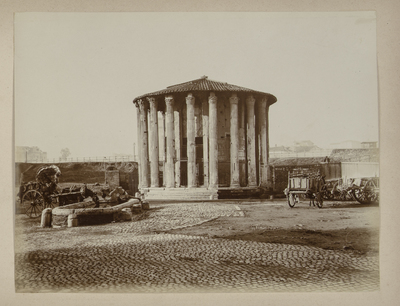 This album is horizontally oriented, with white board bindings and decorative gilt endpapers. It contains 97 photographs from the period 1886-1898, when Stillman was working as correspondent to the Times of London, based in Rome. The photographs were taken in Italy (including Rome, Perugia, Assisi, Segesta, and Siracusa), Greece (Mycenae and Tiryns), and along the Swiss-German border (the Rheinfall and the town of Laufenburg). The album contains many photographs that exemplify Stillman’s visual approach to archaeological sites in which he strove for clarity, organization, and close attention to visual information. It also contains landscapes that reflect his abiding interest in nature and the picturesque capacities of the medium. Among the archaeological and artistic works there is one family portrait, taken in Perugia in 1892, while staying with Count Lemmo Rossi-Scotti. 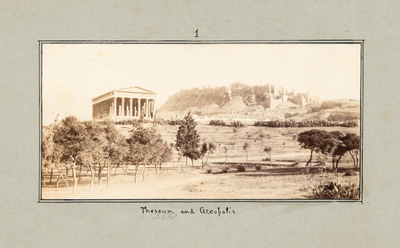 This album is horizontally oriented, with a decorated white binding that has “Atène 1882” in gilt emboss on the cover. It contains 81 photographs that Stillman took in Athens in that year. This album is particularly important for several reasons. It is in part a reprise of the views of his 1870 Athens portfolio – many carefully reshot from the same distances and viewpoints. The photographs are arranged in a way that parallels Stillman’s first portfolio, with distant views of each of the main buildings on the Acropolis , followed by full views and details. For the pictures of the Parthenon, Stillman climbed up onto the ruins and photographed the extant pieces of the frieze, and indicated the mountains visible in the backgrounds of these dramatic views. This album also contains photographs of other monuments in Athens not included in the 1870 portfolio, including the Monument to Lysicrates and the Church of St. Eleutherios. Each photograph has a hand-drawn line border, a number, and most are labelled, in Stillman’s hand. Glass plate negatives and lantern slide copies for these prints are in the collection of the Society for the Promotion of Hellenic Studies, in London. This society offered prints from Stillman’s well-known negatives into the early 20th century. Prints from this series are housed in the collections of the Getty Research Institute, the Beazley Archive at Cambridge, and the Alma-Tadema Archive in Birmingham, among others. 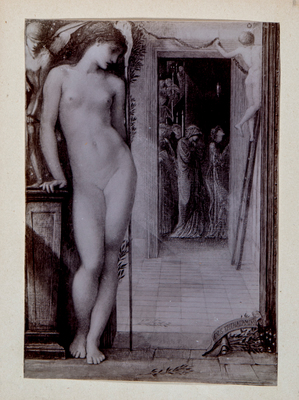 This album is horizontally oriented, and is unfortunately in poor condition. The binding is cracked, and many of the individual sheets are loose. The acidic paper mounts are also brittle, and some of the 38 photographs have become detached; the leaves may also not be in the original order in which the album was bound. In terms of content, this album presents a unique set of interpretive problems. On the one hand, it is an assemblage of commercially produced photographs of artworks and sites from such firms as Alinari, Anderson, and Brogi. It also includes figural photographs of Italians in local costume such as those produced by Giorgio Sommer, as well some pictorialist style landscapes of England. Interspersed with these are also photographs likely taken by Stillman, which include landscapes and a reproduction of the painting Venus Epithalamia by Edward Burne-Jones. This painting, now in the Fogg Art Museum, had been commissioned by Euphrosyne Cassavetti as a present for Marie Spartali on the occasion of her marriage to William Stillman in 1871. If Stillman did indeed assemble this album, he may have been setting his own photographic practice against the growing market for art reproduction as well as the nascent amateur art-photography movement. For reasons of condition and attribution, it is extremely difficult to date the photographs in this album. 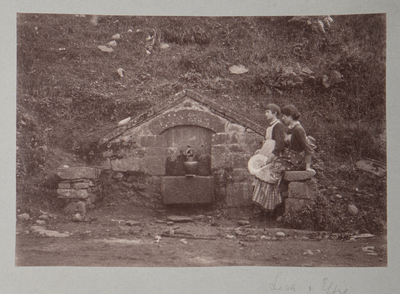 Lisa and Effie Stillman by a Fountain

This album is quite well-preserved, with board bindings and decorative gilt emboss. A sticker on the inside back cover shows that the album was bound by Giulio Giannini in Florence. The firm still exists, and in the 19th century was well-known for its fine custom photo album binding. The photographs contained in it are also some of the finest of Stillman’s work in Union’s collection – showing his restless experimentation with spaces and compositions, and his attention to both detail and delicate tonalities. The album probably dates from the summer of 1883, when the Stillman family had a villa in the province of Pistoia. Photographs in the album include landscapes, a historic mill in the region, multiple views of the hillside town of Cutigliano, views of the riverbed in the valley of Sestaione, and studies of sunflowers. The album also includes two photographs of Effie Stillman and her older half-sister Lisa (by Laura Mack), posed near a rustic masonry spring. This forms of this same masonry spring would appear in Marie Spartali’s 1883 painting By a Clear Well, Within a Little Field (current location unknown), which raises enticing possibilities about the artistic collaboration between Stillman and Spartali.

This group is not an album in the literal sense, but a collection of 7 loose photographs that include portraits of Marie Spartali Stillman, views of what are likely two of the Spartali family properties on the Isle of Wight, a view of Santa Croce in Florence, and a photograph of Charles Eliot Norton in front of his Cambridge, Massachusetts house, Shady Hill. 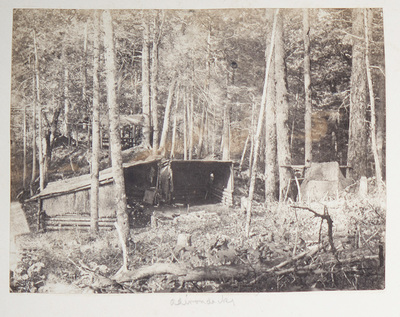 This album contains a total of 91 photographs that date from 1856 to the mid-1870s, and includes some of Stillman’s earliest work in both the U.S. and Europe. In general, the photographs are arranged chronologically, beginning with a group of landscapes which, though on pages inscribed “Naushon,” appear to be of swamps and live oaks characteristic of the American south. Stillman recounts having taken such photographs while on a trip he took there shortly after learning photography. The inscriptions, all in pencil in Stillman’s hand, appear to have been done at a later date, and more or less at the same time. The album does include some landscapes that appear consistent with views of Naushon, as well as of waterfalls in New Hampshire and views of Maine woods. These are proximate to a rare photographic print related to Stillman’s painting The Philosopher’s Camp (1858, Concord Free Public Library), which commemorated the site of the Adirondack camping trip Stillman led with Ralph Waldo Emerson, James Russell Lowell, Louis Agassiz, and other Boston intellectuals. The album also contains some of the first photographs Stillman took in Rome during his years as United States Consul (1862-1864). These include a rare photograph of the Roman Forum before the excavations that began in 1870 after Italian unification, and views along the banks of the Tiber at the foot of the Aventine hill before the construction of the walls that protected the city from floods. There are also numerous photographs of medieval architecture and chateaux in Normandy, France, which Stillman had visited on his first honeymoon in 1860, and again in April 1872. Based on a letter to his friend Charles Eliot Norton, it is most likely that he took the Normandy photographs then. The album also includes a series of views of sites on the Isle of Wight (Merston, Carris Brook, and Arreton), where Marie Spartali’s family had properties, and where his son Russie was buried in 1875. Among the photographs of Cambridge are also views of the Charles River, Harvard’s campus, and Henry Wadsworth Longfellow’s house – several of which were also published alongside writings by Oliver Wendell Holmes, James Russell Lowell, and Longfellow in Stillman’s Poetic Localities of Cambridge in 1876.

This album is vertically oriented, and contains 30 photographs, mostly landscapes. It belonged to Charles Eliot Norton (1827-1908) of Harvard. Norton held the first professorship of art history in the United States and served as the founding president of the Archaeological Institute of American. Stillman and Norton met in the early 1850s, and remained close friends until their deaths. Stillman’s letters to Norton, housed in the Houghton Library at Harvard, span their entire friendship, and are a lively, illuminating source for insight into Stillman’s friendships and thoughts. The photographs in this album include reprints of pictures from Stillman’s 1876 Poetic Localities of Cambridge, as well as a number of landscapes taken on the Isle of Wight.